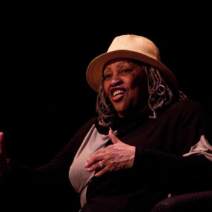 Every writer knows the truth about words… that of themselves and in their studied form… they are limiting, vague… that they can be chains that hold you back. A writer like Toni Morrison is able break the binds and strictures of language in such a way that the words become a liberating force within the reader… permitting a depth in simplicity that could never be otherwise achieved except within her flawless style. Such a writer is rendered thus immortal.