…..and neo-liberal Democrats so dead set against it they are ready to dismiss it quite out of hand? 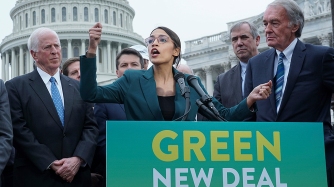 Chances are you’ve heard people both praise and vilify House Resolution 109, otherwise known as the Green New Deal, but it’s just as likely that you haven’t really been given a sense of what it is and what it contains.  A bold, expansive document, it is a comprehensive listing of priorities for the Congress and Senate to consider as it tackles issues that many Americans perceive as necessary for the survival of our basic institutions and the future well-being of all Americans… with the emphasis on the word “ALL…”   The document specifically outlines a series of problems that affect every American and provides solutions that benefit our collective interests, addressing not only the devastating and observable effects of man-made global warming, but advancing the perspective that the radical changes we must use to correct them should incorporate methods that benefit every American, such that no single group or segment of our population is forced to bear a disproportionate share of the necessary cost.  Indeed, if all the proposals are implemented, the plan could very well rebuild our infrastructure, strengthen our nation, and provide a more egalitarian economy simultaneously.

I’ll be writing about the Green New Deal in several posts over the coming weeks, but for now, I would like to give you a link to the House Resolution, so you can read it yourself.  Click on the link below for a .pdf file:

The Resolution is presented in the usual legal format.  I’ve produced a file that presents the same text in a more readable outline form and will post it here soon.

If you do?  You could become an expert on the Green New Deal… able to leap tall misperceptions with a single declarative sentence… able to deflect the speeding bullet-points of right-wing detractors… and you could become the envy of all your progressive friends, while standing for truth, justice, and the American way.

If I could be given a super power, that’s what I’d ask for.

I wrote this about two years ago and posted it on Facebook, but I think it’s time to dust it off and toss it out there once again along with a couple of others, posts that I will resurrect over the next couple of weeks because there should be a conversation about this contentious subject before the shouting match buries it yet again…

This is long, but bear with me, please. It’s a big subject and cannot be treated with sound bites or slogans, but speaks to the very core of our problems. This is something to which I’ve given a lot of thought, more so lately than ever before…. There is once more a debate, but the subject is often too vague and the voices on each side of it are, even among the unified participants within each side, confused and often angry. This is not a new debate in this country… right vs left, conservative vs liberal, but the debate too often rages around the effects rather than the cause of our differences. Enter Bernie Sanders and the surprisingly popular, if not populist appeal of his socialist ideas…
Perhaps the debate is not about some vague idea of “Conservatism” vs “Liberalism” after all, but speaks instead to something more basic… the economic system under which we live. Perhaps the present, seemingly insoluble crisis is about the failure of an economic system that is, no matter how elegantly you describe it or bend it to heel in academic terms, based upon the base and unsympathetic nature of its driving force, greed… or avarice, if you prefer.
Perhaps, once again, as it has in the past when there is a vast, even incomprehensible inequity between the rich and the poor, the debate comes down to capitalism vs socialism.
“But hasn’t that been tried and didn’t it fail?”
“It’s been tried, Virginia, but never properly achieved. Yes, there are many nations in the world who live under systems of social democracy, but the Soviet experiment that you’re thinking of was not socialism at all, but state controlled capitalism. Social democracies, however, such as we see in the Scandinavian countries are thriving and they are only weak imitations of socialism.”
“But isn’t socialism undemocratic,, even stifling, a kind of dictatorship?”
“Absolutely not. In fact, socialism is an expansion of democracy to the point that every aspect of our lives, including in the workplace where most of us spend most of our waking moments is democratically controlled.”
“Sounds too good to be true. And if it’s so great, why aren’t more people talking about it”
“Simple answer? Socialism is inimical to capitalists and capitalists own almost everything. After World War Two, our government suppressed socialism, even to the point that espousing the idea was criminalized. People lost their jobs, in universities especially, to the point that, even now, the subject is virtually taboo on campuses in America.. Even the word, socialism, was stigmatized… a product of the Cold War.”
Socialism is possible and probable within the lifetime of any generation that loses the fear of cultural, racial, religious, and gender diversity.  With our current generation, we are very nearly there. When people truly believe in both equality and justice, when equality is inclusive of all people, when the one criteria to fit the definition of “human” is only and merely their humanity alone, we can have a fair and equitable social and political system, one that is as purely democratic as humanly possible under a socialist system.
Is it possible today?
You tell me…
Do you make justice and equality possible?
Or is there some group that you despise?
Can you answer that honestly?
Probably not.We who call ourselves progressive often cannot converse, much less abide in the same room as those who identify themselves as conservative. Can you look me in the eye and say that you feel equal to someone wearing a red ball cap that bears the statement “Make America Great Again”? Or do you feel that such people are flawed, sensing that your own beliefs and ideals are somehow superior? If you want to live in a world where justice and equality are the backbone of civilization, do you mean to make it possible by including or eliminating those with whom you disagree? And just how do you plan to eliminate them from your just and equitable world?  Do you see the hypocrisy? Do you sense the self-deceit, the conflict and the inevitable injustice within the perspective of “Us” and “Them”?
Justice and equality will thrive when we begin to put aside our prejudices.
Impossible?
“Nothing is impossible, Virginia.”
“How can you possibly make it happen? Where do you even begin?”
“It starts with you.”