I watched and listened. This is both a report and an opinion…

It was enlightening to finally watch and listen to him today after two years of silence and to observe that Robert Mueller walks and speaks with an unexpected air of humility. For some reason, I expected more gravitas and the baritone certitude that some men in high office seem to exude… accordingly, his demeanor makes him more believable, the voice of an intelligent, reticent, and capable observer.
Three things he seemed especially focused upon that I could discern as important matters to relate were these:
1. Indictment of a sitting President was and is NOT allowed under DOJ guidelines and thus no indictment… nor even an accusation against the President was ever going to be part of the process or the report, but Mueller re-iterated that if the President could have been exonerated of wrongdoing through obstruction, the report would thus state, however it did state that he could NOT be thus exonerated.
2. “…the work (the Mueller Report) speaks for itself.”
3. “…there were multiple systematic efforts to interfere with our election.”
God only knows what the pundits will make of Mueller’s statements… I’ve more or less stopped listening, but the greatest take away can be summed up in the following three statements:
Read the Mueller Report.
Read the Mueller Report.
Read the Mueller Report.
When you do… and if you read it with an open mind and an understanding of the law, our Constitution, and the moral imperatives of governance… you will come to the logical conclusion that immediate impeachment of President Trump and all of those in government who have enabled him in his wrongdoing is not only justified, but essential to the preservation of our Republic.

I suppose the greater tragedy in events surrounding the Mueller report and the incredible maelstrom of misinformation that surrounds what may or may not be contained therein is that not only the American people, but such a large number of their representatives in Congress have not read it and spend more time demanding to know what is not included in the report than in actually discovering what is.
Read it for yourself and see if you do not agree with me when I say that “Even the redacted version presents as clear a case of obstruction of justice as any sentient human being needs to impeach the President. It only needs to be read.”
Read it and then contact your representatives and tell them that Trump must be impeached now… today.

You can view the press conference here:  Mueller Press Conference 5/29/2019

Senator Elizabeth Warren is calling aloud for impeachment and a Republican group is buying advertisements on Fox that call for accountability.  The media, of course, is aflame with indignation… somewhat slow to arise, but welcome nonetheless.  How sad that it took so long for the “I” word to surface with any substance behind it, if indeed, the mob sounds and pitchforks can be considered substance,  Yet, even now, before any of these leaders have surely had sufficient time to read, much less digest the entire Mueller report… and before they have seen the likely most damaging information that the frog-faced Trump-friendly philistine Barr has seen fit to withhold from intelligent eyes, they are ready now, after more than two years of obvious and in-your-face criminality and corruption, to finally call up the posse, to saddle up and ride.  Sad that it took so long for our Congress to finally grow a spine.

Don’t get me wrong.  I’m happy they’re so motivated now, dismayed perhaps… knowing that such lynch mobs sometimes lose their steam… knowing that the courts could now become the new and crippling blockades to action… knowing that the candidates and the righteously indignant whoevers will then point to and blame the judiciary as the new stumbling block to justice… knowing that this is but the beginning, so far from the end of it… assuming that Trump is no Nixon, having neither the wit nor the will to resign, but will fight this to the bitter end. 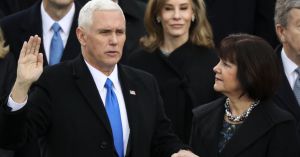 In the meantime, he will continue to fragment and dismantle what remains of our Federal government, a task that pleases many of those who now decry and defame him with newfound zeal for integrity, born-again passion for justice.  And by the time the mob starts to gather, it’s not really about integrity or courage… is it?  Life goes on and Pence is waiting in the wings.  The cure could be worse than the cancer.

Me?  I wanted the man impeached from day one, but I’m still reading the Mueller report and I don’t have a staff to do all the reading and write me a summary… and I never really trusted the media, so I’ll get back to you later with the substantive stuff.

For now?  Save me at least one very big stone that I may guiltless in good conscience cast with all righteous indignation and wrath.

….not by any stretch of the facts. The President has not been exonerated. Just read the 4 page letter Attorney General William Barr sent to Congress, which has just been made public and is available online for download. I’ll be going over it tonight and will provide a commentary on what it means right here tomorrow…

Trump’s enablers and friends have begun to claim vindication directly from Mueller himself. They are wrong.