Skip to content
Fascism is alive and well and it thrives in the absence of courage. The tactics are as old as recorded history and brutal. The fascist cares nothing for your outrage, even mocks it when it’s launched, as so often it is, from the relative safety of distance. It quietly abides in the presence of the law until the fascists themselves become the law, but by then, it’s too late.
From CSPAN’s transcript of last night’s debate…

CHRIS WALLACE: “Are you willing, tonight, to condemn white supremacists and militia groups…?”
TRUMP: “Sure, I’m willing to do that…Proud Boys, stand back and stand by! But I’ll tell you what… somebody’s got to do something about Antifa and the left.”
Hitler had his Sturmabteilung (SA). 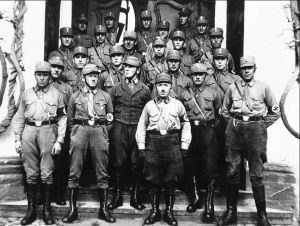 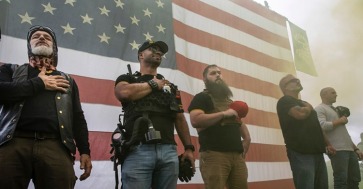 Trump has his Proud Boys.
Not a lot of difference between the two groups, one way or the other, except that the Proud Boys are much better armed and Trump is already in the primary seat of power at the center of our government.
The media pumps the handle at the well of outrage and everyone acts as though Trump’s actions were self destruction. Democrats are calling for a landslide election and Trump has already told the entire nation that, even if he loses, he’s won.
I don’t know what more I can say about the precarious edge on which we reside. Trump said the words himself last night when he declared, from a position of strength, “This will end badly.”  For once, I quite agree… and that should be the clue as to where this all will lead.
Praemonitus praemunitus.
Forewarned is forearmed.

Quo vadis, America? To where are we headed? by James Lloyd Davis is licensed under a Creative Commons Attribution-NonCommercial 4.0 International License.